How a padlock works? 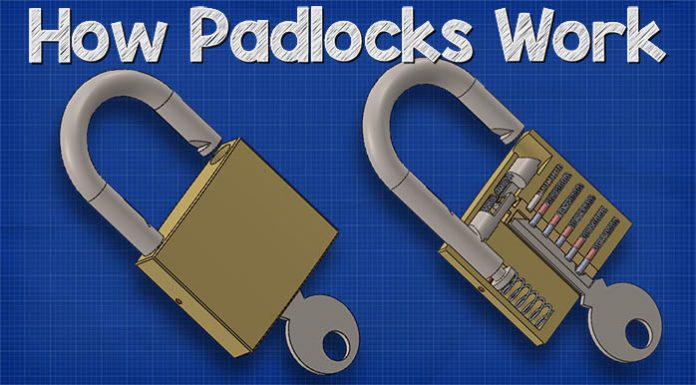 Padlocks come in many shapes colours and sizes. Disc padlock, combination padlock, love lock, luggage lock, bike lock, ws locks. They have been around for hundreds of years, ranging in complexity of design by different people and civilisations depending on the technology and manufacturing processes they had available. With the industrial revolution came the mass-produced padlock which eventually settled on a pin tumbler design. Called so because inside are some pins and a barrel which rotates or tumbles over.

These are strong mechanical locks which are easy to mass produce and we find them used for everything from keeping our bikes where we left them to symbolising the everlasting love between two people on a bridge, and then throwing the key away to ensure it can’t be undone. But these types of locks, especially the cheap ones, can be unlocked without a key if you know the correct method and once we understand how the lock works we’ll learn how to pick the lock.

How the Padlock Works

When we look at a padlock the most noticeable feature is the U-shaped shackle at the top. In the unlocked position, one end of the shackle pops out of the main body allowing this component to rotate freely. On the inside surface of the shackle we will find two notches. These form part of the lock mechanism and we’ll see that part shortly.

When we look inside the padlock body, we can see the locking mechanism.

The first part is the plug. The key will slide into the plug and follow the groves to ensure a smooth transition.

When the key is turned, the plug will rotate. The plug has a number of holes in the top, within each hole there is a small metal cylinder known as a key pin. Each key pin is a different height, and this will correspond to the profile of the key.

Within the housing of the lock we find a number of chambers which align with the holes on the plug.

Within each chamber we find a spring which pushes another pin, known as a driver pin.

The intersection between the plug and the lock housing is known as the shear line. With no key inserted, the driver pins sit part way in the housing chamber and part way within the plug. This means the plug is unable to rotate.

When a key is inserted into the lock, the key pins will follow the profile of the key and move up and down until the key is fully inserted. Once fully inserted, if the correct key has been used, then the top of each key pin will align with the shear line. The driver pins will have been pushed up and will now fully sit within the housing while the key pins sits fully within the plug. This means the plug is now able to rotate. If the wrong key is inserted then the pins will not align and the plug will be unable to rotate.

Notice this lock has 6 spring loaded chambers. Only 5 of these are used by the key to form part of the lock. But the 6th driver pin sits within a deep groove and is not used by the key. Instead, this pin is preventing the plug from being pulled out of the lock body and it does that because it is always engaged into the groove in both the locked and unlocked position.

So, once we have the correct key and we can rotate the plug, we now need a way to release the shackle whilst ensuring it can’t be removed without the key.

At the end of the plug we have a cam. This is just a piece of metal that extends off the body of the plug but it has this shape to it that allows it to act like a leaver.

Surrounding the cam is a latch, placed on either side. The outermost ends of the latches are angled and will fit into the notches of the shackle. A spring sits inside the lock and will push against each latch, forcing it outwards so that the angled edges will be forced into the notch. This interlocking of the latch and notch prevents the shackle from being pulled out.

So to recap on the operation of a padlock.

The key is inserted into the plug. The different sized key pins rest inside a number of holes inside the plug and will move up and down to follow the profile of the key. If the correct key is inserted then the top of the key pins will align with the top of the plug. This pushes the driver pins out of the plug holes and into their respective chamber. The springs ensure the driver pins will be forced into the holes if the wrong key, or if no key, is inserted.

With all the pins cleared, the key can rotate the plug. At the end of the plug is a cam which also rotates with the plug. This connects with the arms of the two latches. The latches are pushed outwards by a spring, this pushes the arm against the cam but also pushes the latch into a notch on the shackle preventing the lock from opening without the key. With the correct key inserted the plug is free to rotate, this rotates the cam which pulls the latches inwards against the spring, releasing the shackle. A spring within the shackle chamber pushes the arm outward releasing the lock.